That's what I've had today. A little teeny, weeny bit of relaxing indulgence. Me, my little dude, my big sis and her little dude spent the afternoon at the Spring Quilt Festival in Edinburgh.

So no ironing has been done, as yet I've nothing to wear to work tomorrow, Euan's clothes are running low but hey it's not the end of the world. We spent the afternoon looking at GORG-EEE-OUS quilts and drooling over hundreds of purty fabrics so it was worth having double the amount of housework to do tomorrow than usual.

There was an exhibition of some of Patricia Archibald's quilts, I absolutely LOVE her work. From a distance you would never guess it was a quilt, most of them are like paintings. They are utterly fantastic!! 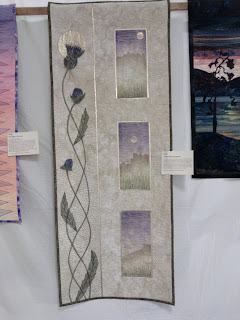 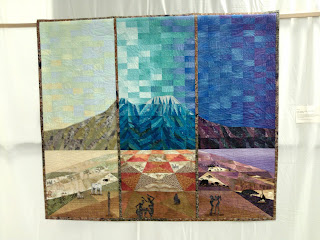 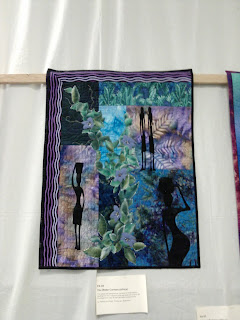 The pictures aren't brilliant, forgot my camera so had to take them with my phone so they don't really do them justics but they are beautiful.

I haven't really had time to blog much lately or really had the inclination too either. It's been 7 weeks since I went back to work and I was surprised at just how tough it was. There is so much going on at work just now that it's not a happy place. December was the issuing of the single status letters where people found out if their wages were going up or down - mine is going down, not as much as some others so I do count myself lucky, but a couple of thousand is still substantial. Then the middle of January it was announced that the whole Council is to be restructed and as a result, my department - Housing Services - is being broken up and merged with about 4 other services I think. So currently I've no idea what service I'm going to be working for, where I'll be located and ultimately what I'll be doing. So going back has been hard for a whole range of reasons. I haven't had to worry about Euan as daddy is doing a fab job looking after him but my work doesn't feel like the place it used to be sadly. So, along with being diagnosed with depression at the end of last year, the beginning of this year has given me a few difficult days to figure out how to deal with them. But I do and I'm starting to see the brighter side of things again thank goodness.

On a much cheerier note my little dude is coming on leaps and bounds. Crawling about like Speedy Gonzales, pulling himself up on any item of furniture in his way and almost walking!! Well only when holding onto his Pooh truck, but it's still walking. This is his 'Eddie Vedder' look! 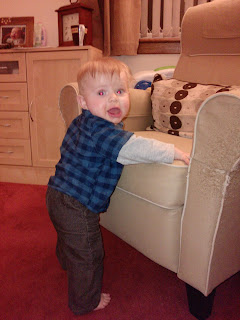 I can't believe he is now 9 months. We talking yesterday and it's weird, on one hand it's like 'OMG he's nine months old, how did that pass so quickly' and at the same time it feels like, 'Is he ONLY nine months?' because we can't remember him not being here. But he is best little dude in the world (ok, I'm maybe a little bit biased). He's already turning into a bit of a bookworm!!!! 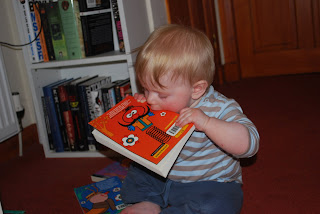 This is currently the state of my craft table! What a sorry site, the quilt I attempted to make before starting work (who was I kidding ha ha ha!!) is sitting under my machine half done, but nowhere near finished. I've agreed to make thank you cards for my sister - 50 of them!! 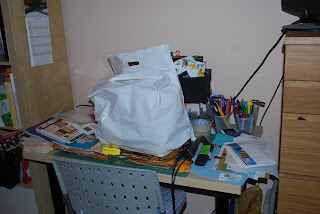 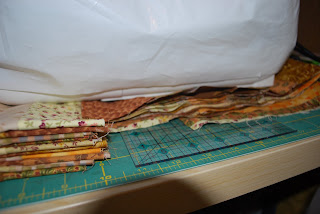 And then I've come home today with this lovely bundle of fabric. My sister's idea, we both bought the same fabric and she's set us both a challenge to make a quilt using the same fabric to see what we come up with. Now just when will I have the time to do that!?!?! (I am looking forward to seeing what I can do though) 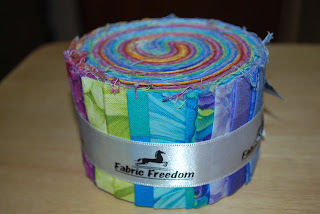