A world in mouring!

Well will this be one of the rare, 'So where were you when you heard XXX died?' events? What will my answer be as to where I was when I first heard that Michael Jackson had died ............ getting out of the bath! The 11pm news was just coming on the radio and there was information that a male had been taken from his house, possibly unconscious, but nothing had been confirmed. Me and Pedro then watching the surrealness unfold on BBC News 24! It was weird watching it, before it had been officially confirmed people where talking about him in the past tense!!

I've never been a huge fan but I do like his music from the 70's and early 80's - nobody can deny that 'Thriller' is an iconic album. My sister even has a copy!!!

But seriously watching the news today and the music channels it is bizarre - nothing else is happening in the world today apparently! And even MTVone had Michael Jackson videos on today - they never play music any longer, it's usually just odd reality tv shows. An odd day, all in all!
Posted by Biff No comments:

I'm turning into one!! I'm turning into a complete baby bore. Lol!!! (and I can't spell for toffee btw). But what can I expect ......... wee man is 4 weeks old (well a month tomorrow actually!), I've barely left the house without him in the 3 weeks since we got home from hospital, I've hardly seen the news, I've only read about 3 newspapers since then and I send pretty much every waking moment with him! But I love it!

So what the heck - lookie see what I made!!!! Euan doing his superbaby impersonation!! 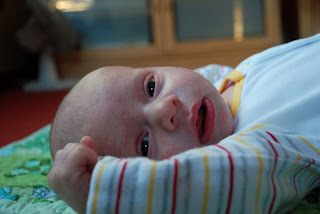 Actually I do have something else to say ...... last night I watched (while feeding wee man - multi-tasking!!) 'Famous, Rich and Homeless', a programme which took 5 famous people and left them on the streets of London for 10 days with nothing apart from what they stood in. Working in Housing I tend to have reservations about these type of programmes but it was very interesting. It seemed to give a very realistic view of rough sleeping but at the same time it was fairly uncomfortable viewing. Which, I suppose, is what the main intention is. For me the most upsetting part was one of real homeless people who was paired up with a 'fake' homeless famous person, describing the reason she became homeless, she described herself as being treated worse than the family dog! She'd been abused by family members including her mum. It was completely heartbreaking. Just makes you think about things you take for granted - like a loving family and a roof over your head! Shouldn't be too much to ask for eh!
Posted by Biff 1 comment:

What a difference 4 weeks make!!

4 weeks ago just now I was in labour, sitting in our car, outside Stirling Royal Infirmary, hoping to be told when we went back into maternity triage that I was in active labour! 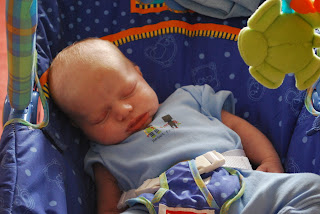 And you know what ........... it's not that hard really! (I'm so going to regret thinking that aren't I!!) But that's what I feel at the moment. We've got ourselves into a kind of routine, he's sleeping at the moment but will be awake within the next hour wanting fed and then we (me & wee man's daddy) need to be fed but as he's not home till 8, that will be later!

Sleeping wise wee man did not bad last night, 11.30pm til 5am ish! Still takes a bit to get up at that time but that's a good chunk of sleep for a 4 week old. Probably won't happen tonight but we can hope!!

I'm getting the hang of getting the amount of housework done as well as looking after Euan, now I just need to try and fit in some 'me' time. Well actually writing thank you cards and maybe, just maybe, getting some scrapbooking done.

Tomorrow will be a test - Pedro is working from 11am and won't finish until nearly 9pm! So maybe I'll be eating my words this time tomorrow.

But maybe not, life is only as hard as you make it. I've made a few times over the last few weeks hard for myself but my hormones are finally settling down, things don't seem quite as overwhelming as they did 2 weeks ago and they are keep getting better every day. It's the small things that make me happy these days .......... a wee smile from Euan and the odd decent sized explos-a-poo nappy! Who'd have thought that would make me proud!?!?!?!
Posted by Biff No comments:

How can one little person create so much washing!

And how will I ever find the time to do anything other than washing!!!!!
Posted by Biff No comments:

My last post was to say - No show!!! Well life has now altered beyond all previous recognition! All thanks to this little bundle of fun 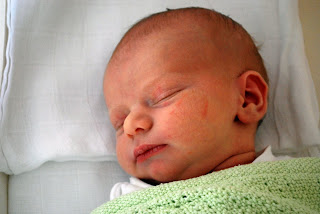 Let me introduce our baby boy Euan :) He was born Tuesday 26 May at 7.42am after a VERY, VERY, VERY long labour! I ended up having an assisted delivery but he arrived in one piece and screams his lungs out so that's all that mattered. We then had to spend a week in hospital due to a slight infection but he's a heathly little boy now.

So all I can say at the moment is WOW!!! Nothing anybody says, or nothing you read, can prepare you for the life altering, head spinning experience that is life with a newborn!

There are loads of highs but there are also loads of lows :( Thankfully the lows are not quite as intense or as frequent as they were last week so we're just taking one day at a time. It's a steep learning curve but he's putting on weight like nobody's business, so inspite of what I'm doing or not doing our wee man is thriving!!
Posted by Biff No comments: