Nevermind the whole 'sick building' thing, we had sick house!  We'll all been ill!  Pedro had the flu first - not just 'man flu' either, real flu.  Then the dude had a chest infection thingy, almost like croup which saw us ending up at the out of hours GP at midnight on a Friday night, 2 weeks ago today.  Then the next day I ended up in bed feeling ill, totally and utterly wiped out.  That was me until the Monday morning when I hauled myself into work only to be sent home a few hours later.  I stayed in bed the rest of the week. Proper influenza, none of this 'oh I've got the flu and you're all better in 24 hours' stuff - haven't felt that ill since I was at school.

So that was then and now, over a week later I'm on antibiotics from the doc (shock! horror! - still can't believe I got them for flu) and I'm still sniffling and coughing away but so much better than I was.

In amongst all of that we've had 2 birthdays, one Christmas Fayre and today the Dude is 18 months old!!!!!!!  Where does the time go?

Christmas is approaching very fast, too fast for my liking!?!?  I'm not feeling very organised and that is starting to annoy me.  I need to spend time this weekend just planning out my next few weeks.  My organised side (or anally retentive side some might say) is not happy being so out of sorts - I don't know who I've to buy for, what I've to buy, when I need to have it bought by, or anything.

The only good thing is that we have a tree, some fab light and we're pretty much sorted on the tree decoration side.  Although I do need a good tree topper - just can't decide what I want on the top.  Don't really fancy a fairy, too girly for this house, need something a bit more 'dude' like. 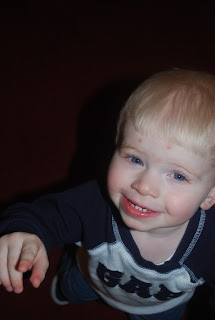 Getting into the spirt

For a long number of years I loved christmas.  Coming downstairs on christmas morning, finding out which pile of parcels was mine, which pillowcase full of presents was mine (we didn't do stockings - just good ol' pillowcases!), trying to figure out what was in each wrapped up parcel before opening it.  The helping out with christmas dinner, eating til I was fit to burst.  Then life changed and I fell out of love with christmas.

But now life has changed again and I'm ready to love it again, I'm looking forward to getting into the spirit of things.  Yes it's the dude's 2nd christmas but last year he didn't really understand what was going on.  This was his attitude towards his first present - the 'I'll open it with my teeth' approach. 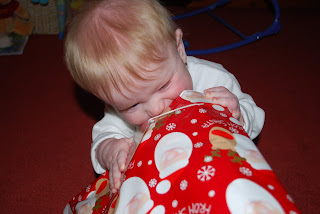 But this year is different, he understands about playing with toys and is amazed by sparkly lights and stuff.  So from this year we are making our own traditions, our own happy times and that starts with the decorations!  The fibre optic tree is being replaced with a tree we can properly decorate and I've gone a little bit crazy already - there is a lot of red in there!  I've decided my theme is red, green & gold - and a bit traditional if I can find the right stuff. 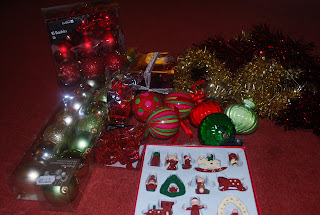