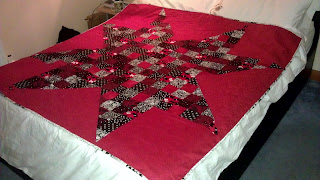 My star quilt is finally finished!!  I only started it in February so finishing it at the start of June is about my average timescale LOL!  Part of the reason it took so long was due to having to piece the backing (which I haven't taken a photo of - doh) but it always gives me such a headache piecing large backings that I procrastinate like nobody's business. 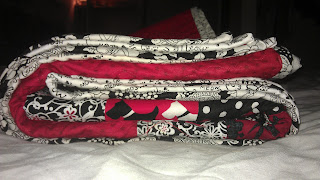 But I got it done, I only lightly quilted the star - basic lines following the lines of the star and decided to do a bit more quilting on the large triangles in between the star points. Difficult to see but this is just normal stipple quilting 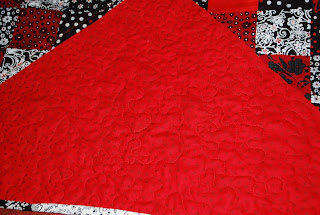 And then on the other points I varied it slightly and tried to turn the little loops into circles - I'm really pleased with how I did. 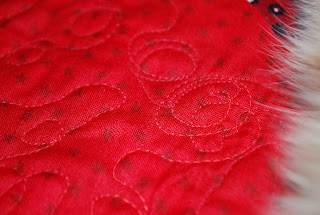 I have to admit these photos aren't the best, I finished the binding on Thursday night and since then it's been dull, wet & windy - not ideal for taking photos outside.  This is my dodgy attempt at taking a photo outside 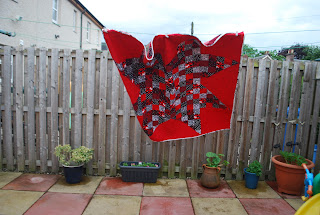 We also spent some time today rearranging Euan's bedroom, now he's three it's time he has a bit more of "boys" bedroom instead of the current lemon coloured walls with Pooh bear wall decals.  So part of deciding how to decorate has involved moving storage units from my sewing room/Pete's office and I unearthed some of my scrapbooking supplies that I bought years ago (honestly it's been years!).  I did a fair bit of scrapbooking before Euan came along but for some reason since his arrival I have done nothing ... nada.  Taken loads of photos and even got some of them printed too but I haven't made any scrapbook pages about my little boy.  Most people get into scrapbooking WHEN they have kids to mark all the major events, and the not so major one too, but not me, it's like I've been scared away from it!  I could have made the time, I certainly have for making quilts, and a scrapbook page takes a fraction of the time of a quilt!  So I'm going to have a read this this lot for inspiration and finally get round to recording some of my son's life. 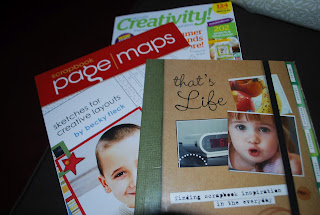 All quiet on the 'making' front

Not a lot has been going in terms of making stuff for a while, no real reason just lots of stuff - mostly very boring, but real life stuff - going on.

But I have been buying The Art of Quilting magazine and been following the sampler quilt which it will create.  Admittedly I need to do quite a few to catch up but this is where I've got to so far. I'm pretty pleased with how they have turned out :)

I've also, finally, gotten round to quilting my star quilt. Hopefully I'll get the binding made tonight and get it sewn on this weekend - only started it in Feb so a fairly quick make for me!! 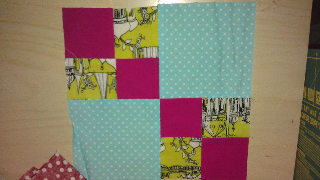