that's about the speed my laptop is going this week!  I'm not known for my patience (just ask my darling husband!) and it's running very low with the spectacular speed of my laptop, or otherwise.

Work has been crazy busy this week, I was finishing a presentation at midnight last night, so I haven't had any time for fun stuff like starting my cushion cover for the Brit Quilt Pillow Fight Swap.  I have started my design, I'm going for a christmas theme 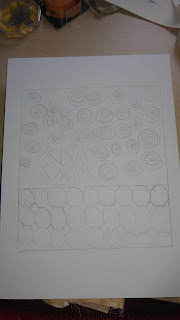 Hexagons along the bottom, appliqued trees and some kind of quilting (swirly?) in the sky is sort of the plan but I'm not quite there yet.  First off I need to decide between modern or traditional christmas, or possibly a combination of the two. 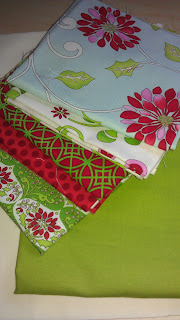 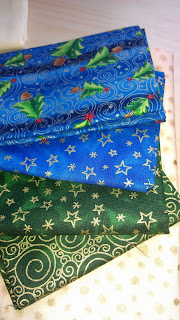 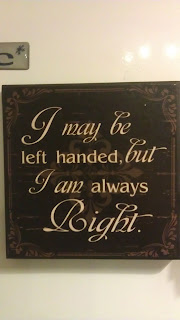 The husband doesn't always agree but he knows better than to argue too much!!!!
Posted by Biff 2 comments: 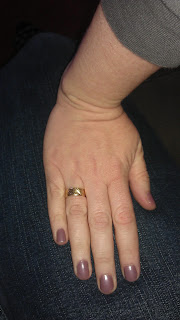 To explain, this is my right hand, placed on my right leg facing towards me.  Apparently not everyone can do this!  I've been able to this for as long as I can remember and never really thought anything of it.  On Monday I finally had my appointment with the Physiotherapist for a pain I've been getting in my right hand for just over 18 months and she explained that I have hypermobility.  This basically means that my ligaments aren't as strong as most people and they don't fully support my joints so I'm able to move them more than other people and, more to the point, they move past the normal range of motion, which isn't advisable.  I had to do various simple tests like see if I could place both hands, palm down, on the floor without bending my legs.  So after these tests I received a score of 9 out of 9, so I'm very hypermobile apparently.  Although I don't have hypermobility syndrome thankfully.

So since Monday I've been having lightbulb moments all week when different things happen, like going over on my ankle and realising that this is due to having rubbish ligaments and joints!  It's also linked to poor posture and clicking joints, both of which I have the pleasure of.  I can't get rid of rid of it but if I try and strengthen the muscles it will be an attempt to support my joints.  From what I've discovered it's also common for people with hypermobility to have weak muscles strength - believe me I'm rubbish, I have no strength whatsoever. So it's been an interesting week.

I have been missing in action for nearly a month from my blog.  I've been thinking about where or not to blog about why for a little while now.  But due to the very nature of the beast, not discussing it is part of the problem.  So at the risk of overexposing myself, nearly 2 years ago I was diagnosed with depression and put on medication for a short time.  That helped me get over that phase of life (I still remember the incident when I realised I wasn't coping and needed a bit of help).  But that was a while ago and I've been back to myself for a while, until a couple of months ago when things just started to become overwhelming again.  I'm reluctant to take medication again so I've been giving myself a little TLC, eating way too much (bang goes the diet)  and I'm back on more of an even keel (I was going to say normal but that never been a word associated with me!!).

So being a more enthusiastic about most things I'm starting to think about putting my sewing machine into action.  Having had a very busy August and a September that isn't really worth dwelling on I remembered I haven't blogged about my purchases from Festival of Quilts in August.  I bought the Farmer's Wife Sample Quilt book which I've wanted for a while, some red, black and while fat quarters, some halloween fabric, a little charm pack and some bargain fat quarter bundles of blues, greens and yellows.  Not sure what I'm doing to do with it all yet but I'm sure I'll find something! 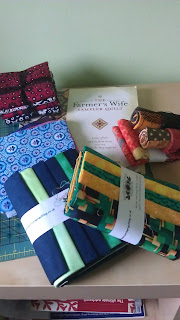 Now I had a quick look over on flickr yesterday and I've realised there is another Brit Quilt Swap about to begin.  So since I had such a good time doing the last one and I'm in need of some enjoyable distraction I'm going to go see if I can sign up before it's too late.
Posted by Biff 6 comments: