is what I'm feeling like at the moment!  I should blog more often but then again I should do more of lots of things, including sewing.  I have managed to get my quilt top finished for the Brit Quilt Swap, need to decide on a backing, quilt and bind it - before Friday *eeekk*.  I'll get it done, no matter how well I try to prepare I'm always at the coo's tail.  So this is how it is looking just now - I'm really pleased with it. 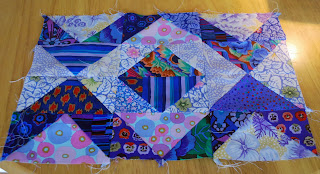 Earlier this week I was off to see Bon Jovi at Murrayfield.  I've seen them a couple of times before (well ok, this was my 13th time) and they were superb as always.  Slightly subdued but then Jon had damaged ligaments in his knee the week before so was wearing a knee brace and couldn't boogie about as he normally does but it didn't matter too much 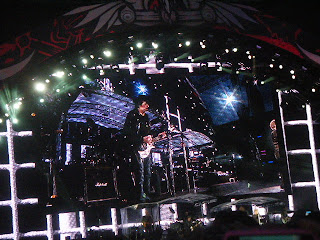 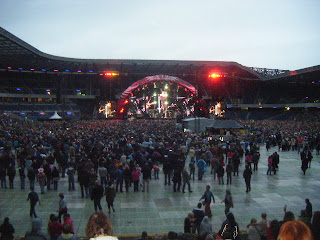 I had to laugh at my friend Sue who was there for the first time and kept saying 'oh my god they're so good, how haven't I been to see them live before?'  Now Sue and me have been friends since we were 13 and I think I was 15 the first time I saw BJ so there's been plenty of opportunity over the last *cough* 21 years - it was hilarious!

I've been spending time tonight sorting out my photos and I'm disappointed in myself.  The first year of Euan's life I've got really well documented but his 2nd year not so much.  Some months I've got tons of photos, other months barely a handful.  I've been trying to make sure I get photos on the 26th of every month (his birth date) to track how much he changes over time but due to a small diy hiccup, I forgot for most of today and only remembered just before bedtime.  So today's best photo is this one, my 25 month old son trying to walk in mummy's wellies!! 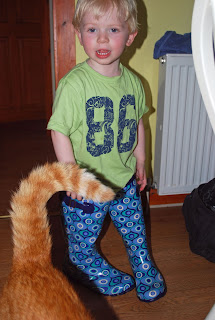 Well trying to anyway!!  I've been busy trying to finish off things and start new things.  The dude's quilt top is finished.  I think - I like the way it looks but part of thinks it needs a border.  Yes/No?  Maybe I'll make a border just to see how it looks.  I'm planning to back it with a brushed cotton to make it lovely and snuggy. 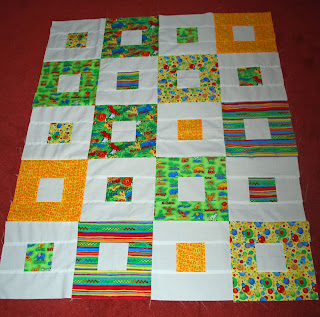 My hearts quilt is now finished and sitting on our couch being leaned against every day.  I'm really, really happy with it and in this lovely warm June that we're having (!) it's been used already. 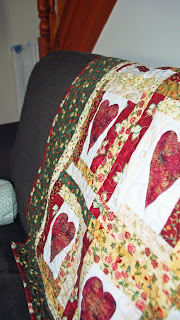 I'm getting behind on mystery quilt but a big part of that (other than, you know, life getting in the way of other fun stuff) is that I've been seriously procrastinating on the block which is to be paper pieced.  But thanks to Sheila who sent me some really helpful and very clear instructions on how to do a block I'm over the mental block I had.  So following the instructions I made this funky little tree (I added the border to finish it off) 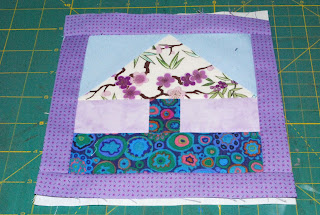 I've made a little bit more progress with my mystery quilt since this but not much!

I've also being doing a little bit more of my brit quilt swap mini-quilt.  It's coming together nicely.  I haven't decided how to finish it off but I'll have a little bit of play and see what I can come up with. 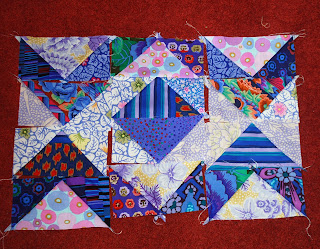 I haven't been my usual organised self the last few weeks so I haven't had as much time as I've wanted to do much else but after the end of this week I should have more time as I step down from being as involved in our Toddler's Group (1 year of being the treasurer is enough for me).  But for now, seeing as it's Father's Day, I need to spend some time with this little man and his daddy.  Steak for dinner me thinks! 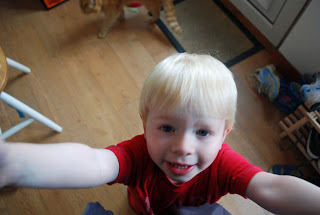 Life is getting in the way of other things I want to be doing just now.  Although today we're taking at slower pace and hoping to get caught up with various things. 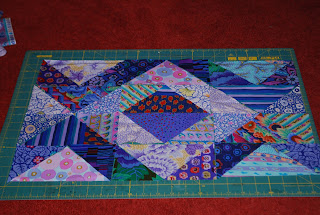 I have done some playing about with the design for my Brit Quilt Swap mini-quilt.  I'm not overly happy with all of the triangles, they need jiggled about a little to make it flow better, but over all I'm pleased with the design and how it's looking.  Just need to get it made up!

I'm getting behind on my mystery quilt too so hopefully this weekend will free up some serious free time. 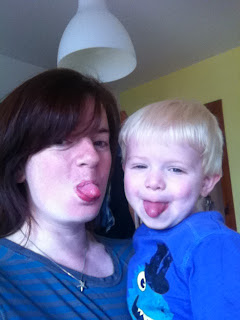 Me and the dude were mucking about in the kitchen last week and out of all the pictures I look, this is my favourite.  Much silliness!!!
Posted by Biff 1 comment: