So 2 weeks ago our schools finished up for the summer and this brought up the whole 'what do I do for a his nursery teacher?' query!

What is the normal done thing for a pre-pre schooler to give to their teacher.  It was a whole new ball game for me.  So I hummed and hawed for a few weeks and, as is my default position in life, left everything to the last minute!  Mug rug was considered and then forgotten about when I came across this little gem by Karen over at Quilty Creations.  Bingo!  This was just up my street and perfect as a little leaving gift for a teacher.  Karen's instructions are fab, but as usual, I managed to cock up, em, put my own twist on my first attempt it looked like this when I was done.  Looks ok doesn't it - didn't fit!  Still not sure how but I managed to make it too short in a way that it fitted fine if the notebook was open, just couldn't close it very easily.  So fairly useless as a functioning notebook.  Also my machine decided to have a little flaky to itself the night before I needed to have this finished - cue minor, mild panic at 11pm! 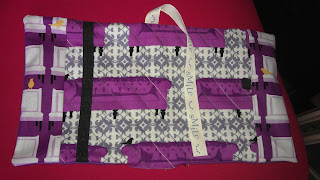 This was also the night before we took our cat back to the vet to find out the full extent of the problems with him.  Saying I was a little bit tense was a bit of an understatement.  So after Little Miss decided she wanted fed at 4am I got back out of bed and attempted to fix my machine, which I did.  Then I decided to have an other go at making the notebook cover.  This decision was made at roughly 4.45am and I needed to have it completed (& have a willing sewing machine) by midday.  There's nothing like a little bit of last minute taking your mind off the unpleasant side of pet ownership to get your sewing butt in gear!!  And this is what I came up with :) 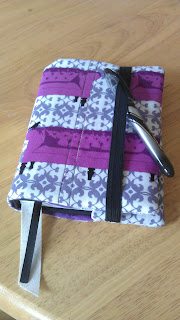 I tweaked the pattern a little bit, used one long strip instead of making the inside flaps different and I didn't finish by double sewing the edges at 1/8th inch. 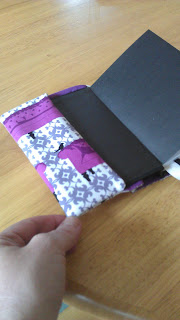 I was really pleased with the end result, I'm hoping his teacher was too!  (As it turns out Euan will have the same teacher after the summer so need to improve my gift idea before end of next summer term as she will have had him for 2 whole years by then!?!?!)

We've had our holiday and slowly slotting back into a normal routine, well as normal as I can do before returning back to work after maternity leave in 6 weeks.  But more about that next time, off to finish watching The Adjustment Bureau on LoveFilm - which is turns out we've seen before but neither of us can remember what happens!
Posted by Biff