It's been a BIG week in our household this week, firstly I've been off on a weeks' holiday - yay!!!

Secondly the dude had another round of immunisations, his first in months, but he was a big boy and after a teeny, weeny little cry when the needle actually went in (well who wouldn't!) he was fine and smiling his charming smile at the health visitor. (We've definitely got a future heartbreaker on our hands)

Thirdly, biggest news of all, it was the dude's FIRST birthday this week. Mucho organising was done, a bit of an odd looking cake was made (OK I appear to be good at brownies, not so much at birthday cakes!), tons and tons of presents were bought/built/opened/played with and the duder had a great time. So much so that he fell asleep sitting up in his cot listening to his bedtime story. 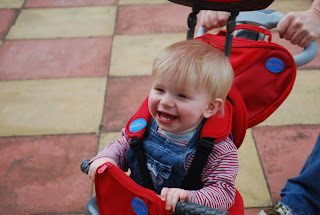 Lastly, I'm developing a fairly big bump on my forehead - it's what comes of trying to open a car door and not moving your head out of the way!!!