I had thought that I was on top of everything but the last few weeks have been a bit weird. Been finding things a wee bit difficult but slowly I'm beginning to feel like me again. We've had a few monumentous things happen in the last week,

No.1 - Euan is now sleeping in his cot, in his own room
No.2 - He is sleeping pretty much 12 hours at night (woo hoo!!!!!)
No.3 - We went to the cinema on Saturday night to see Harry Potter - together, just the two of us, childless. It felt really odd but the munchkin was asleep before we left and was still sleeping when we got back, didn't wake once much to his auntie's delight!


This was Euan trying out his cot a few weeks ago - he's soooo tiny! But he loves it, he can stretch out to his hearts' content. 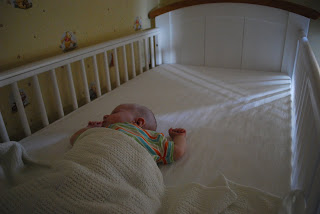 Just signed up for a scrapping class during September - maybe that will give me so inspiration to make something soon.
Posted by Biff

But he's not 6 months old yet! *naughty grin* You know what I think about all that nonsense, good for you - do you see how relaxed he looks!! And sleeping 12 hours through? Fantastic. Good job done, Mama!!