He came, he left presents, they got opened and played with.  Christmas is just about all over and done with and now I feel like I can finally sit down and chill!!

I wasn't up too late on Christmas Eve, the building of the Dude's garage and keyboard were fairly straight forward. The garage started off like this 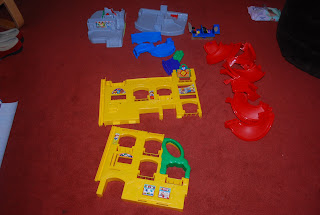 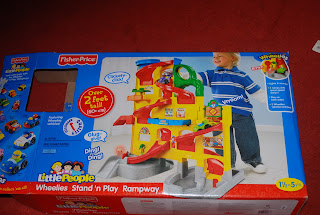 and ended up like this!  Of course I had to have a little play, just to make sure it was put together properly of course!?!? 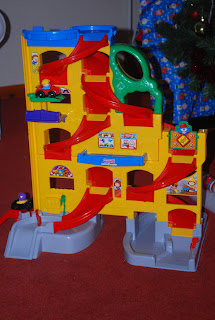 I then had to wrap everything - built up garages are not the simplest of things to wrap on your own!  The dude had great fun on Christmas day opening everything up and then deciding what to play with.  He has been well and truly spoiled the last few days but he's worth it.  Although we might need to move to a bigger house to fit everything in.  (Seriously - I'm already thinking about getting rid of a chair and changing the TV unit just to make more space) 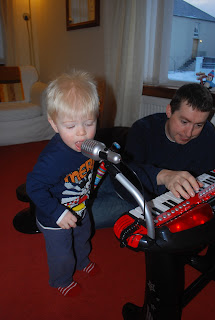 (Singing along with daddy) 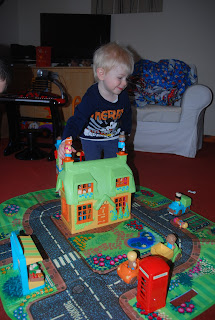 (Playing with the Happyland village set) 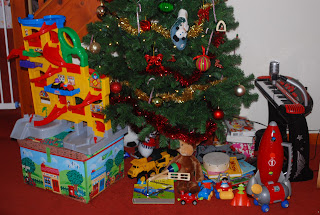 (All the toys under the tree) 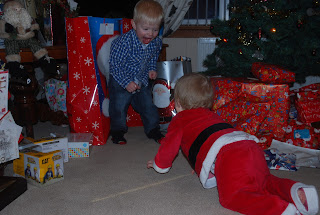 ﻿(Giggling at being chased by his cousin - who can only crawl!)
Yesterday (Boxing Day) we had dinner at my dad's - more presents﻿!!  But a good time was had by all, the Dude had great fun playing with his little cousin (the Squealer) who is now 11 months and yesterday the Dude turned 19 months(!?!).  It was pretty much the first time they've been in each other's company for a prolonged period, when they can both move about on their own.  I predict they are going to be a terrible twosome in a few years, if yesterday was anything to go by!!
I got some fantabulous presents, which to be honest I've hardly had time to look at, but they involved lots of baking goods (a proper pie dish - very chuffed about that), food stuff and other funky stuff.  I've still got another week til I start back to work so I intend to do lots of baking, making things and just generally taking some time out for me.  I got a funky book on sock animals for my birthday and I bought some toy stuffing just before christmas so I will be making something in the next week.
Posted by Biff