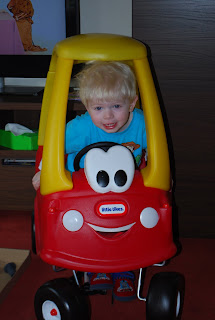 .......is 2!  We've had a busy week.  I've been on holiday and spent the first half of the week preparing for the Toddlers AGM last Wednesday.  Being the group treasurer does involve a fair bit of work making sure that everything is up to date and logged properly so I wanted to make sure that I had everything correct.  Which meant that I checked, double checked and triple checked the accounts before the meeting.

Then Thursday was the Dude's birthday, this is him in one part of his birthday present.  We didn't get a chance to build it up until the morning of his birthday which was interesting to say the least.  It's looks fairly simple doesn't it?  We didn't think it would take very long - it's only a few pieces of plastic after all!  Over 2 hours later we had a different view of it!  But he loves it so that's all that mattered.  The other part of his present, which is bigger, went together so much easier and quicker - sod's law eh! (that's my nephew checking out the doorbell) 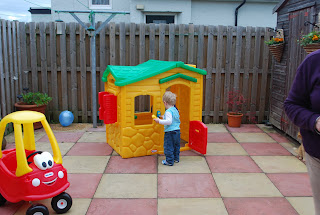 I attempted to go one better than last year's cake and I'm pleased with the result.  I'm going to spend some time this year improving my icing technique before the next birthday but it tasted really good and my butter icing was just amazing :)  (that'll be why my jeans are tight!) 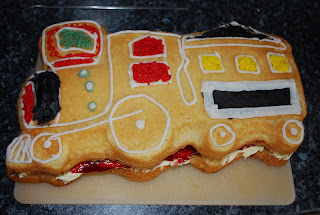 And to finish off my week off work we spent the weekend at Grannie's Heilan' Hame holiday park.  It's at Embo, which I'd never heard of before, but it's about 3 miles from Dornoch (the place where Madonna and Guy Ritchie got married) and it's lovely.  Check out this beach ....... (and blue sky) 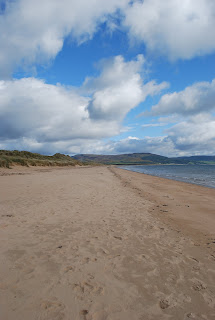 I'll be back tomorrow with more about the weekend.  Just now I'm off to have a decent cuppa (I'm contemplating taking my own mug on holiday the next time to try and get a proper cup of tea) and watch a programme about space archaeology!??!
Posted by Biff

Hey, we just watched that programme - it was amazing.
Am about to email you some stuff on paper piecing.